This is Part Three of my journal detailing my experience volunteering in an orphanage in Iasi, Romania.

I’ve only been in Romania a little more than a week, but there has been so much stuffed into that week that it feels like a month. A month consisting mostly of walking.

For three days this week, we made a trip to Chişinău, the capital of the neighboring country of Moldova, better known as “Isn’t that a brand of chocolate?” It is the only other place in the world besides Romania where Romanian is spoken as (one of) the national languages-the other being Russian. Another confusing thing is that the Romanian lei (currency) is different from Moldovan lei-so we had to exchange our money yet again when we arrived in the country.

Our journey started at 2:30 am, when we boarded a sleeper train. It was my first train ride ever, and I was a bit excited. That soon faded, though, as the rhythm of the train bounced me to sleep. I was woken by stern-browed border guards who had gotten on to check everyone’s passports. I told them shakily that we were going to Chişinău for “turism,” but they didn’t seem to believe us. Finally, though, we arrived.

I expected Chişinău to be a quaint little hamlet that we would quickly tire of. But we got off the train station into a bustling, honking, shouting city, filled with delicious food and friendly people.

The food was, as ever, mainly bread-based. In the morning, you can buy pastries at any little corner stall. The placinte cu măr (flaky apple pastry) was definitely my favorite, but honestly, the Moldovans know their way around carbohydrates. You can’t go wrong. For dinner, there were traditional favorites, beet salad and mamaliga, a ball of cheese and corn. It almost made all the walking (more than 20 miles in total at last count) worth it.

One of the most enjoyable parts of the trip was bartering in the flea markets. Normally, I don’t like to haggle because I think it’s pretty rude to go to a country where the exchange rate is already favorable to you and try to drive the price down even more, but it’s expected here. My best deal was for a pair of hand-carved Russian dolls for my sisters. “Optzeci (eighty),” said the proprietor when I asked him how much for each one. I shook my head thoughtfully, pretending that I knew what I was doing. “Şaptezeci pentru amândoi (seventy for both).” I didn’t expect him to take my first offer, and indeed, he countered with eighty. “Şaptezeci şi cinci (seventy-five),” I said, and the dolls were mine.

We spent enough time in Chişinău to ride the trolley bus like locals. One day, we met a woman called Svetlana, who praised us for our decision to volunteer and told us that she had been to Wisconsin and Minnesota. Her companion, a psychologist, told us that she worked in Virginia fifteen years ago to find out how we care for hospice patients in America, and this all because we offered them our seats. Another stranger took our picture in Centru Parc and then told us the best places to eat. They may not smile much, but Romanians and Moldovans are warm and kind. 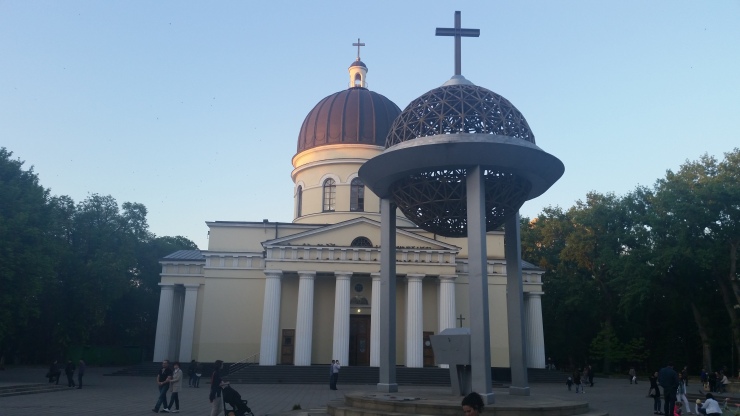 The most beautiful part of the city is the Catedrala Naşterea Domnului (Cathedral of the Lord’s Nativity), an Eastern Orthodox cathedral in the heart of Centru Parc. The exterior doesn’t look like much, but inside is a wonder of gold-plated ikons, symmetrical altars, bright-burning candles, and soaring paintings. We also went to the Ciuflea Monastery, which is a complex of beautiful blue buildings where monks still live. It left me in awe, as beauty always does.

Now that I’ve been on a trip, I’m excited to meet the children and get to work. I have already promised myself not to corrupt them like I have my brothers and sisters, who may or may not have been sung to sleep with the dulcet tones of Bullet For My Valentine because I don’t know any lullabies. So here’s to a great summer.

This site uses Akismet to reduce spam. Learn how your comment data is processed.